French Ligue 1 is a habitat where footballers of a very high level coexist year after year. In addition to the power that the PSG roster accumulates and the quality that is usually summed up by clubs such as Monaco or Lyon, which signed Bruno Guimaraes just a few months ago, there is a lot of talent hidden away in not-so-strong teams. Today we’re focusing on three underrated players in the competition: three men who are performing above what is suggested by factors such as their market value or their fame, even if these are hardly tangible.

The first of them is Xavier Chavalerin, a key player for Reims, the team that has conceded the fewest goals in Ligue 1 this season (21) and was fifth before the tournament was interrupted due to coronavirus. Chavalerin is a versatile midfielder who in his second year in the league has registered excellent metrics in the defensive aspect. He averages almost 4.3 ball recoveries and in his position there are few players so difficult to overcome in one-on-one situations. He has a 72% success rate in tackling. In this graph we have compared his numbers to those of midfielders who have played at least 900 minutes in the French championship this year. 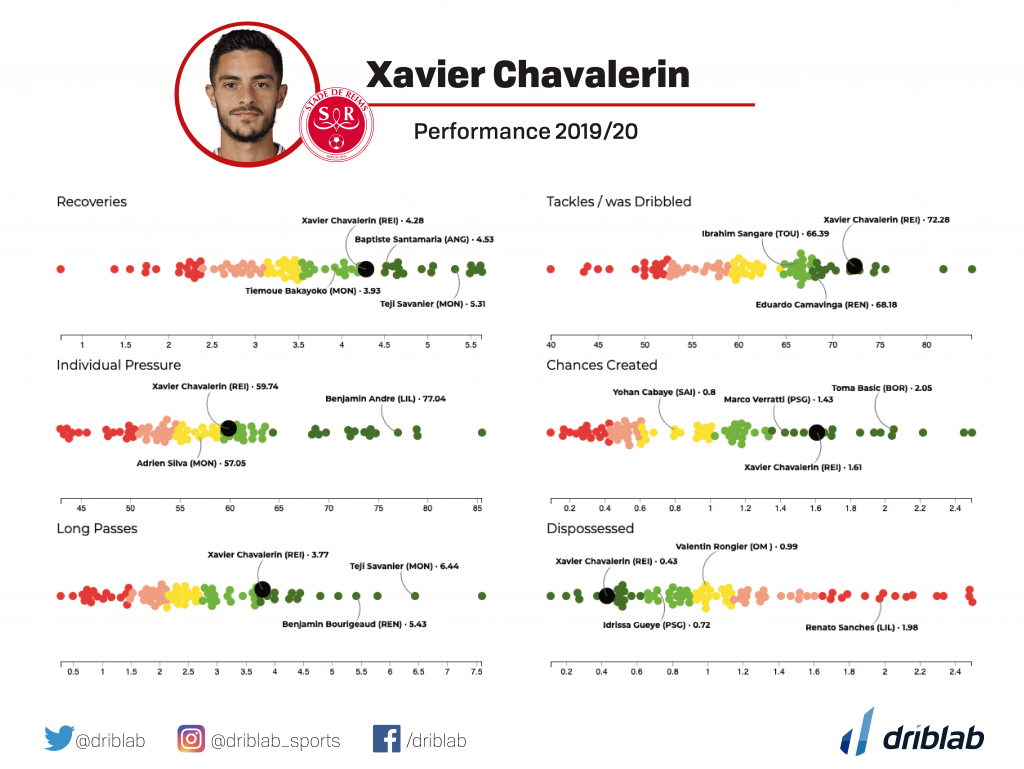 He doesn’t have good creative numbers in terms of dribbles or trough balls. But the truth is that it is difficult to stand out on the opposing half in an offensively limited team like Reims. Nevertheless, it must be said that Chavalerin is not a bad player with the ball. He misses very few passes in the own half (92%) and only suffers 0.43 steals for 90 minutes. His high average of chances created is because of the his condition of set-pieces taker.

Our next name is Zinedine Ferhat. His superb ability to generate shooting situations for other team-mates had already attracted attention years ago in the Ligue 2, while he played at Le Havre. In his debut campaign in the French top division, he has only managed to add three assists, but the reality is that he has generated a lot of danger in those final meters considering the possibilities of Nîmes, a team involved in the battle for permanence. In 2,426 minutes he has added 7.03 expected assists, an accumulated amount that is only exceeded by three players in the Ligue 1 (Di María, Payet and Mbappé). 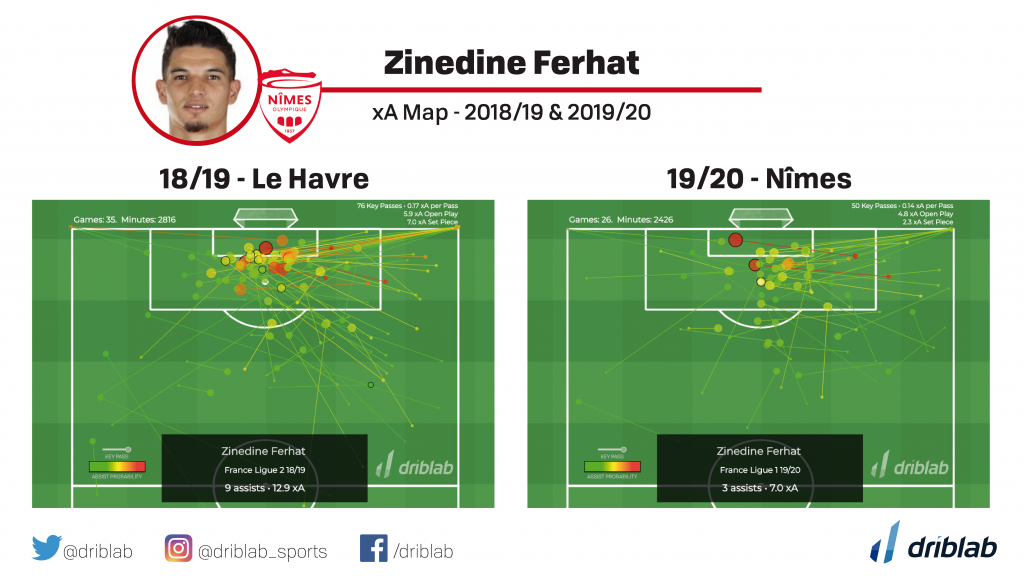 This year Ferhat is being less productive on the set-piece, but his average of xA in open play has increased from 0.16 to 0.18. This speaks of a fairly mature player. Despite his unbalanced profile, he is not a player who is prone to dribble and this year his success rate in one-on-one actions has not reach 45% . However, because of his depth and his vision in the last pass he should have a place in a superior team.

Another player who seems ready to make a competitive leap is Alexander Djiku. Strasbourg was right when they paid for his transfer from Caen in July. On the radar below, we can see that the centre-back has improved in many parameters. He has a higher passing success rate (87%), shows a top effectiveness in the long balls (61%). And also has much more influence than last year in the expected goals (xG) generated by his team, taking part in the build up of 0.32 per 90 minutes.

On the other hand, supported by his physical qualities and with a little more experience at the first level, Djiku has become a very powerful player in individual disputes. He wins 67% of his aerial duels and the rival attackers just manage to overcome him 11% of the times they attempt it. We’re talking about a really promising defender who has also played nearly 600 minutes as a pivot this season. The radar we see, however, belongs exclusively to the 1,634 he has played as a centre-back.

This space could also be occupied by players like the Rennes’ complete right-back Hamari Traoré or the veteran Thomas Mangani (Angers), who is among Ligue 1 midfielders who make more ball progressions and is still a significant threat from the corner.