If we are honest, this article was going to be about the most reliable forwards in five best leagues until, searching data and graphics to show the best finishers in European football, we saw a winger breaking into the stats of the best ‘9’s in the current season. At first, we do not suspect because one gets used to see Lionel Messi where by position or by minutes does not touch him. The surprise comes when that winger is none other than a 19-year-old teenager. In the middle of 2020 we can’t pretend that Jadon Sancho is a surprise or an unexpected name when we analyse who the most outstanding players are, but we’re talking about a top-class finisher and an outstanding chance creator. In fact, if we look at the big leagues,only two names have 10 or more goals and 10 or more assists: Jadon Sancho and yes, Lionel Messi.

An established finisher at 19

What is surprising is not that Jadon Sancho appears among the best finishers of the season with his age, what is striking is that such a young player maintains this outstanding level and even improves season by season. Since last season we see that Jadon Sancho has not needed so many clear chances in the six yards box to achieve such a positive efficiency. For every expected goal generated Jadon Sancho averages almost two scored, improving his already outstanding record from last year. His finishing and shooting metrics have improved and being able to maintain this kind of efficiency is kind of unexpected. 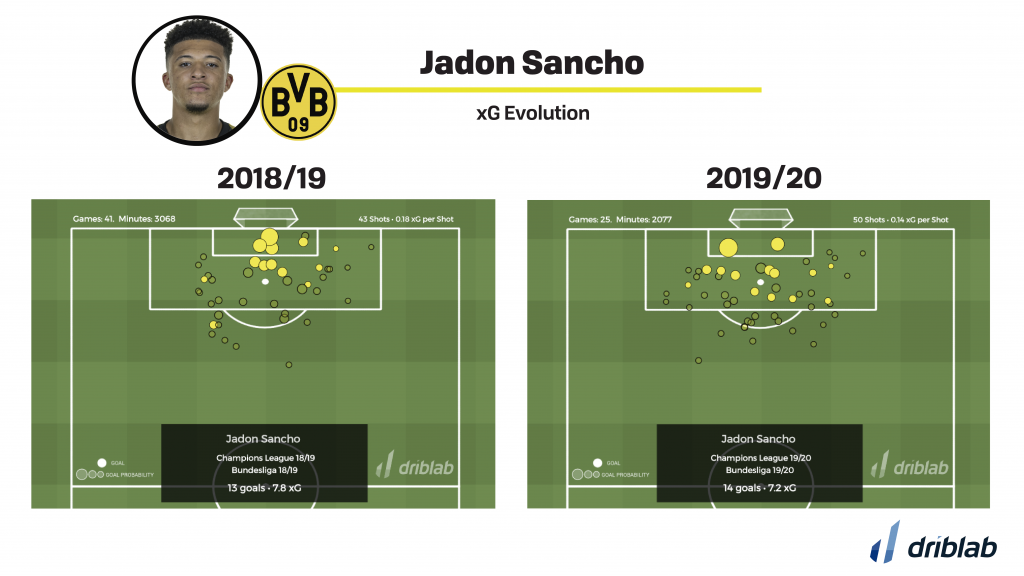 If it’s already atypical to see one winger as one of the most efficient profiles in front of goal if that profile is a 19-year-old this is really difficult to see and it is worth stopping to analyze him. In fact, his figures continue to progress and make it clear that we’re looking at a decisive player. So, to put this profile into perspective, the comparison is even more striking when you look at these figures against the other wingers and attacking midfielders in big five leagues with a maximum age of 21. The figures make it clear: Jadon Sancho is currently the best finisher of his position among the players of his generation. The difference between Jadon and the majority of his age and position profiles shows a totally different reality: Sancho scores almost a third of his shots and generates 0.7 non-penalty goals per 90 minutes. 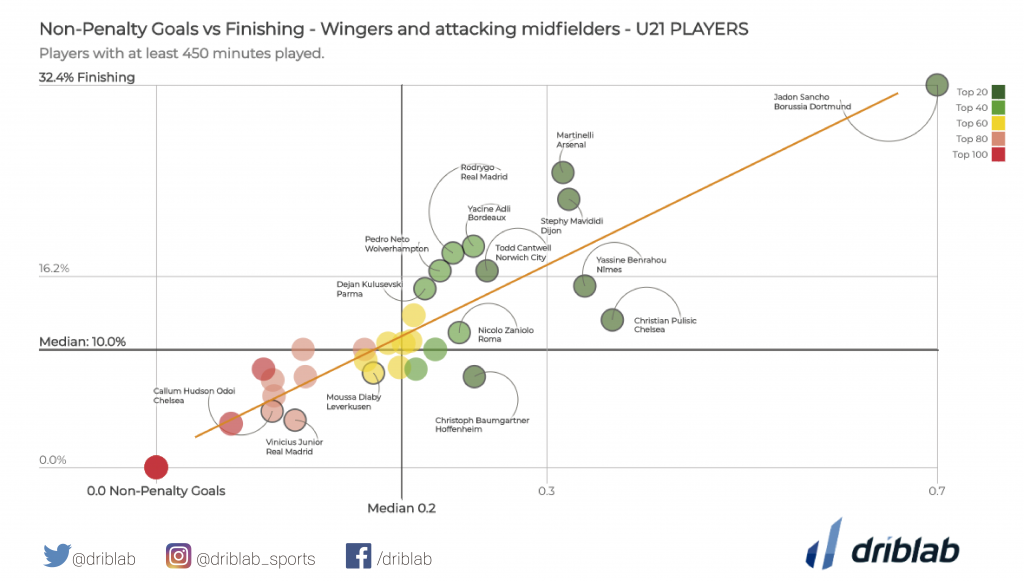 More and better with key passes

The most surprising aspect of his evolution as a goalscorer is that his influence with key pass has not fallen with his greater scoring presence. It stands out how he has achieved that his production in terms of expected assists has been greater even with a smaller role in set pieces. More and more influence in open play and better selection within the rival box both for shooting and passing. 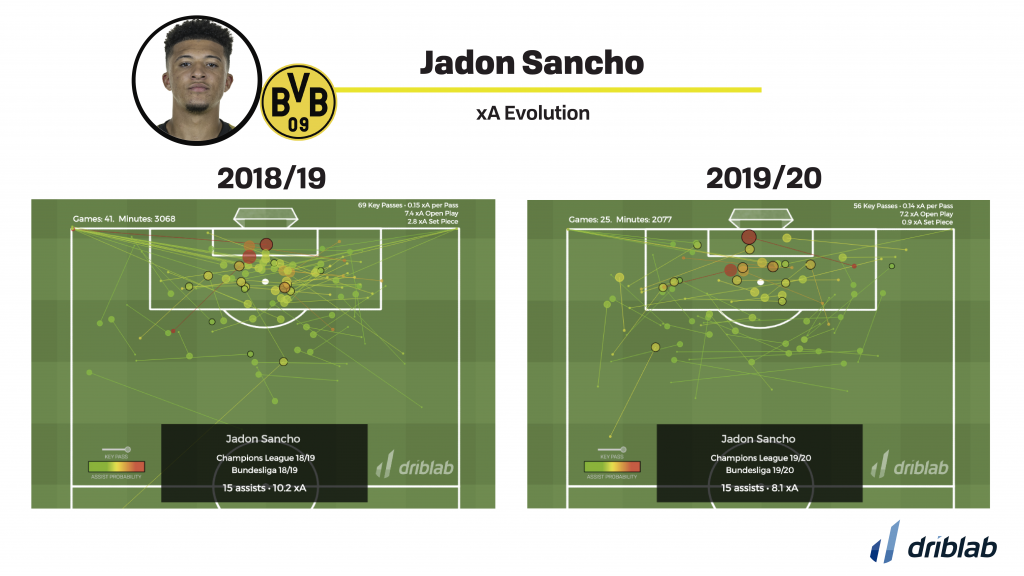 In the comparison with the rest of the U21 profiles of the five big leagues we see how Jadon Sancho does not distance himself so much from the rest of the names but continues as one of the outstanding names. In fact, if we look for a similar performance in both finishing and creating chances, the name that most closely resembles him is Christian Pulisic, the player that lost his place because of Sancho’s growth at Dortmund. In the following graphic we compare Sancho’s production in open play key passes and expected assists with the rest of U21 players in the big five leagues including all positions. Only Kylian Mbappe comes close to his numbers without being the set piece taker. 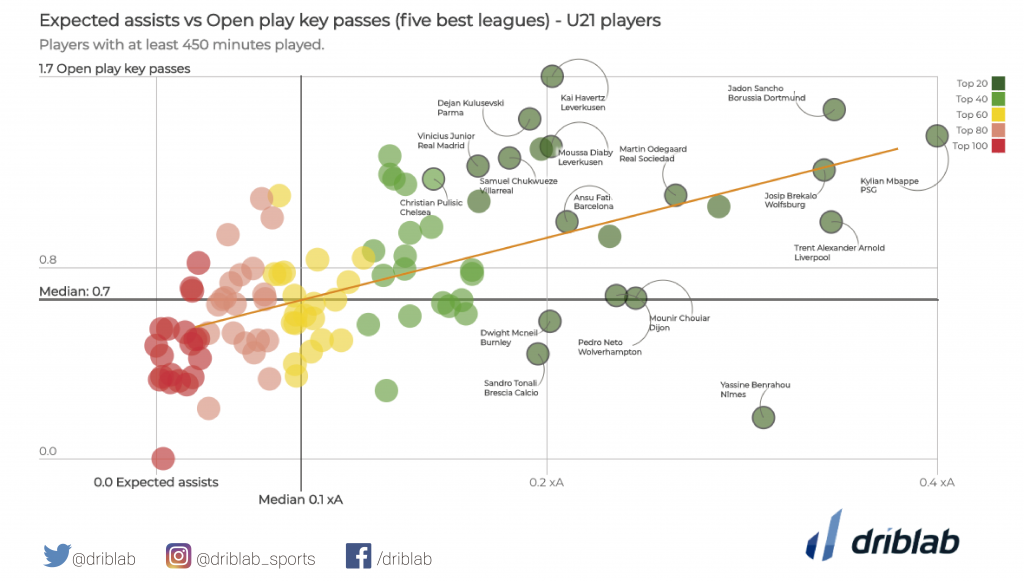 The data leaves little room for discussion in order to evaluate Sancho’s status. If a club is looking for a winger with influence in the opponent’s box, the name is Jadon Sancho: the best of his generation in his position. The most interesting thing is not to confirm that the English winger is very good, nobody is surprised anymore, the most striking thing is to analyze how this star continues to grow and evolve into a profile that chooses better and is more decisive in final third.