The transfer market is not over yet but the clubs have decided not to wait to make some of the most expensive transfers in history. Rumours for years like Eden Hazard to Real Madrid or Antoine Griezmann to Barcelona have come to an end, new stars like Frenkie De Jong or Joao Felix take a step forward and even Tottenham returns to spend strongly. In Driblab we want to show our approach to the big summer signings so far and compile the top 10 in this post that will be update as the official announcements are made:

If at the age of 19 you already know when to shoot and when to assist, how to create chances with key passes, dribbles and all this improving your performance without care about the step from second team to first team then you’re quite good. Also, if you stand out in Benfica it’s clear that you’re not going to get out cheap. Atletico has bet on the young Joao Felix as a response to the departure of Antoine Griezmann. What is clear is that Atletico is paying present but, above all, future. Proof of this is how it has improved his ability in front of goal: better shooting selection, better conversion rate and better game reading to make runs without the ball. 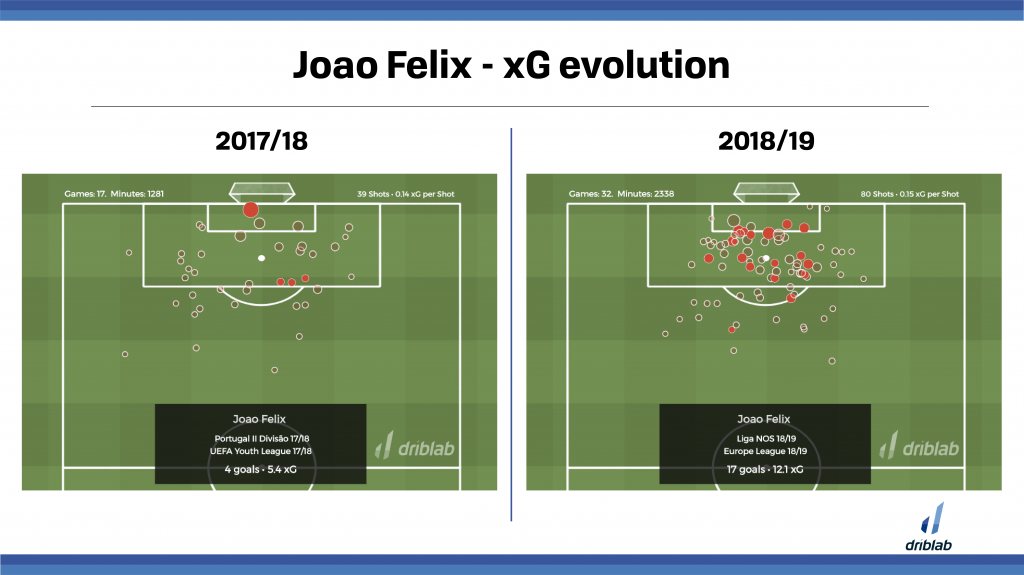 One season later and without a second episode of his documentary, the French striker arrived in Barcelona. An important bet for a player who had a worse performance this past season. Griezmann acted more as a key passer than as a finisher with the signing of Morata and the Frenchman was not at his best but obviously in a more possession based style his stats back this move. Barcelona not only gets one of the best and most complete strikers (he has good conversion % and has a very high volume of chances created) but also gets a reliable replacement that could play in Messi’s position or even in Luis Suarez’s role if needed solving a long term problem in past seasons when they had to rest. A logical move for Barcelona and less dramatic for Atletico than a summer ago. 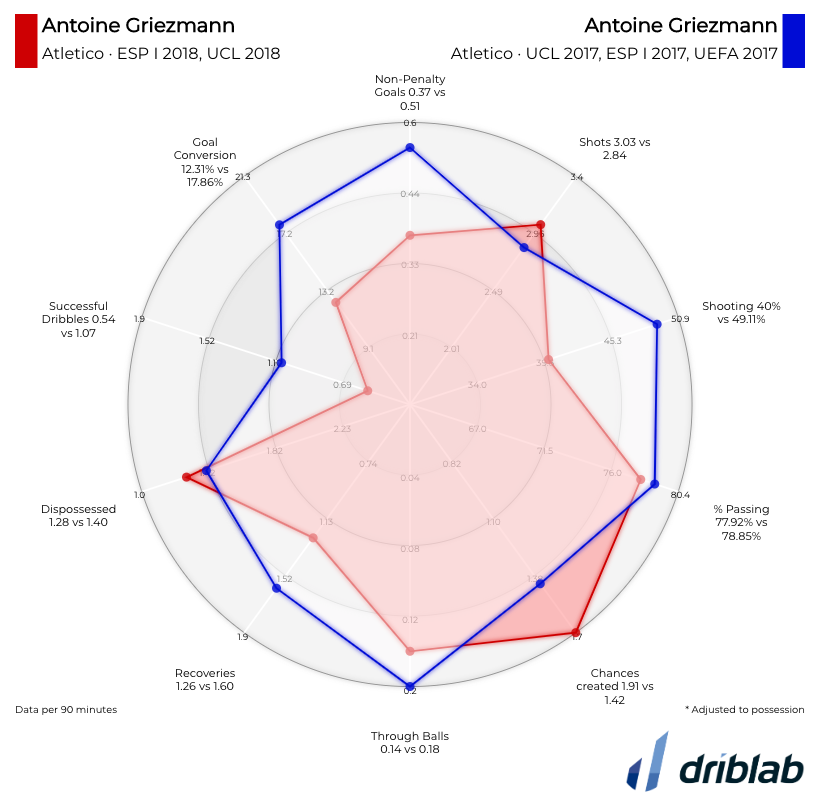 If Real Madrid last year lacked creativity they have assumed responsibility signing the most similar player to Lionel Messi according to our models. We have compared his 2018/19 stats with the rest of wingers and attacking midfielders in five best leagues and he is at the top 20% in terms of chances created, successful dribbles and xG Chain. This summer seems like a key moment for Real Madrid’s short team future and it is clear who is the signing that generates more expectation. 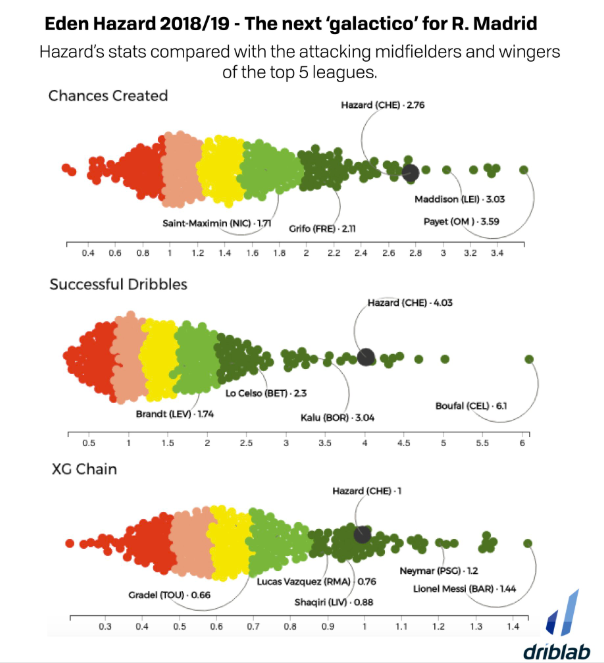 Juventus have been the European giant that has given most weight to their central defenders in recent years: Chiellini, Bonnucci and, to a lesser extent, Barzagli were the key to success. With the passing of the years they lost strength at the back line and the signing of Matthijs De Ligt is the return to the formula that took them to two Champions League finals under Allegri. The heir has already arrived at the Vecchia Signora: great passing influence, well-positioned all the time and a lot of potential to improve also with tackling and interceptions.
. 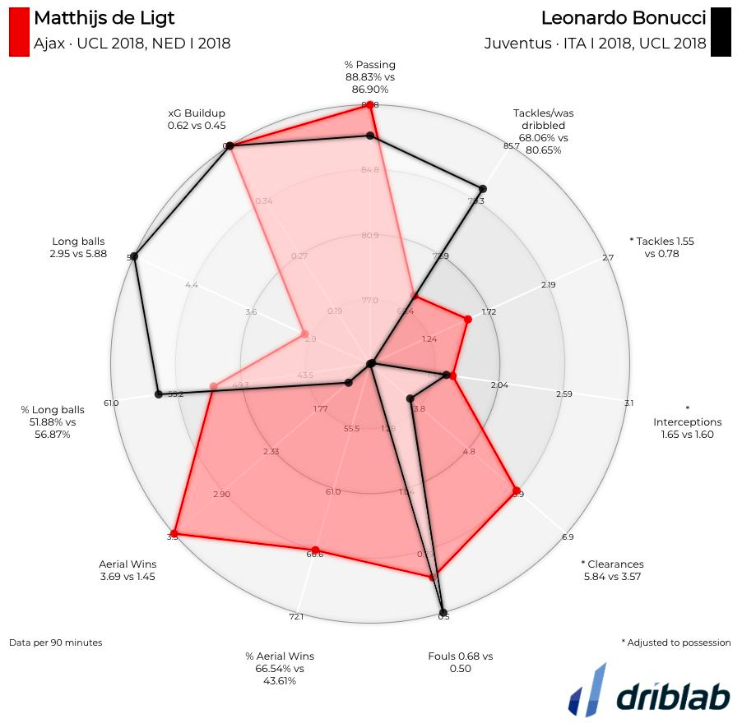 The Atletico has been one of the busiest clubs in this market although the exit of Lucas was already known for months. Bayern is looking for movements that rejuvenate the squad and lay the foundations for a long-term project and the strongest bet has come in the defensive section. The price is set by the release clause and how difficult it is to find left-footed central defender who has also won a World Cup as a full-back. Good move for Bayern – his defense was far from the level of years ago – and good price tag for Atletico. Lucas and Pavard will have a tough challenge ahead of them. 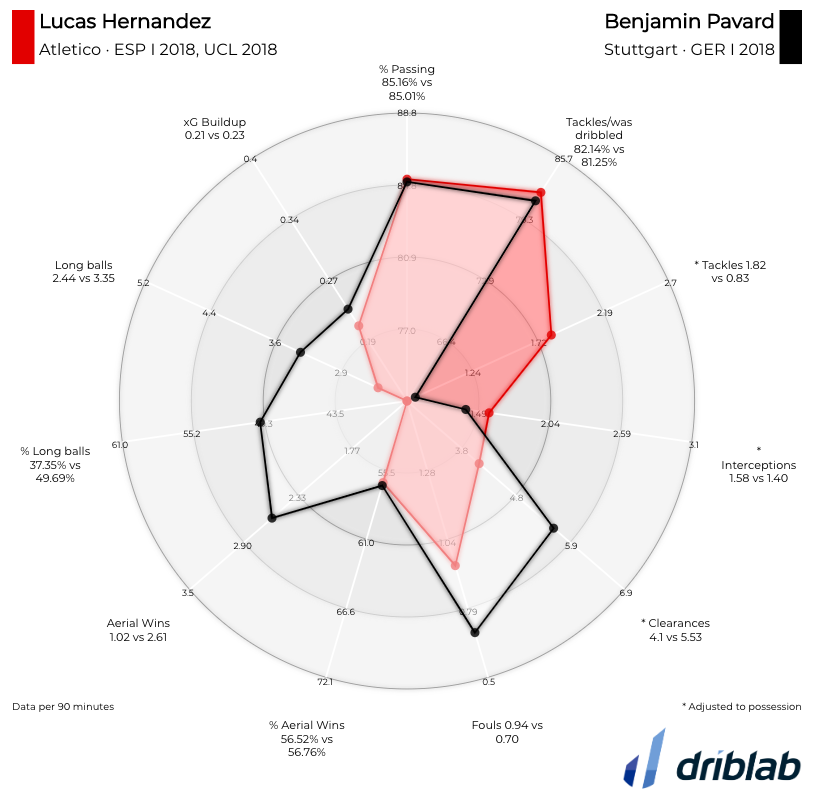 Ajax’s great season in Champions League has made clubs more keen to spend for Dutch young talents.  A 75 million transfer for an Eredivisie midfielder would have seem crazy seasons ago but Frenkie De Jong’s radar chart is quite impressive. The truth is that Barcelona are bidding hard for a profile hard to find: accustomed to a style with similarities, capable of revocering, dribbling, find spaces between line and creating chances. We don’t know if he’ll end up as Busquets’ heir or if he’ll be used a bit higher but is always worth paying attention to a radar like this. 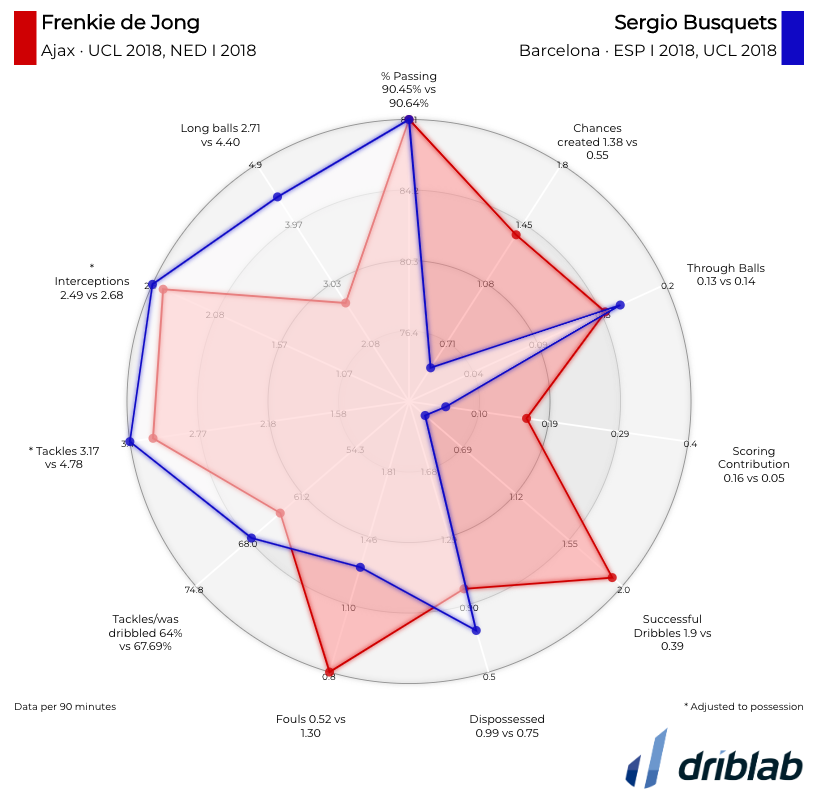 Manchester City needed a replacement for Fernandinho more than a year ago. Rodri looks like Fernandinho. The player had an assumable release clause. It is one of the most logical moves this summer: Rodri has performed better with a more possession based style like Villarreal’s. A good move looking at Rodri’s evolution and obviously for Guardiola’s City that needed to reinforce this position. This transfer makes much more sense than those rumours that linked Saul to that position months ago. Could be Rodri the piece that City was missing to fight for Champions League? 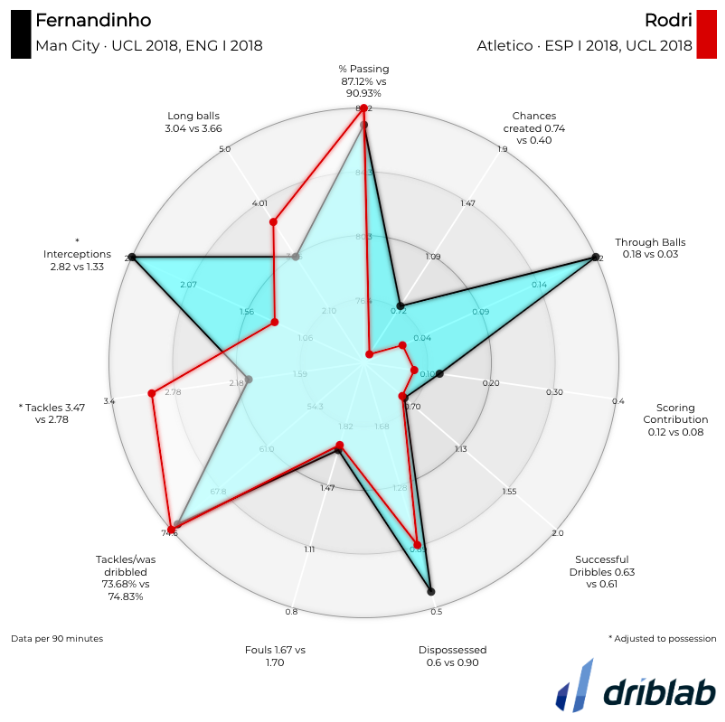 The transfer ban for Chelsea forced this signing to be brought in last January but it will not be until August when the American debuts with the blue jersey. BVB get a good price for a player who no longer had a starting role, Pulisic is in search of his best and Chelsea get a reasonable replacement for Hazard and fits the policy of betting on young people that marks the beginning of Lampard’s tenure at Stamford Bridge. He comes at a difficult time for the club and in a squad that needs the best Pulisic but the American comes to a club that gives him control from the start and a system that gives him back his best context: freedom of movement and space to dribble, face and risk. Can Pulisic return to his best level and improve? 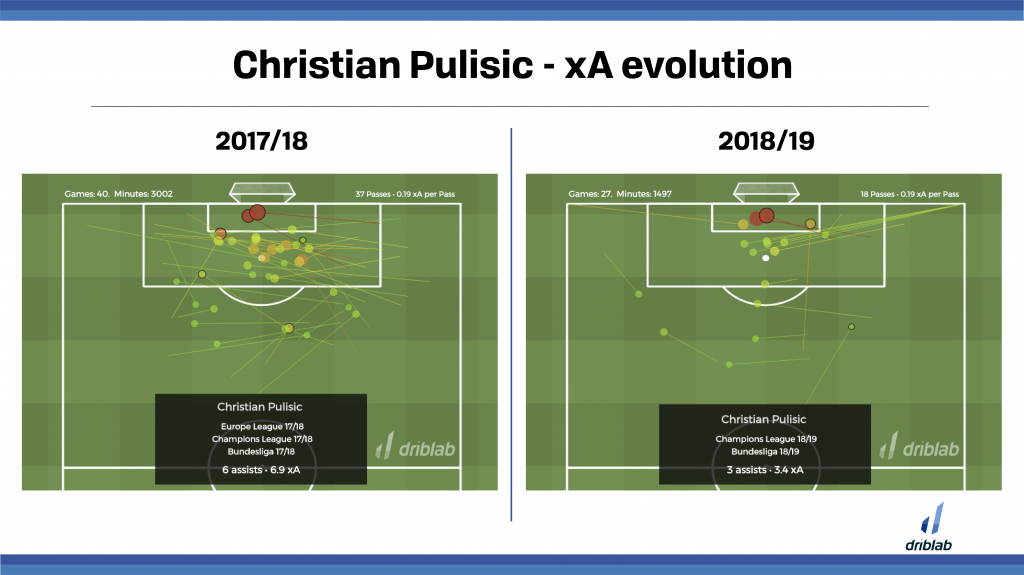 After 18 months without no signing, Tottenham is back in the transfer market. Tanguy Ndombelé starts a new era for Tottenham: with new stadium, spending again and settled as a Champions League team. After been linked with Man City or Real Madrid, the new Spurs midfielder is a very complete profile: his levels of tackles, coupled with his vision to create chances and his contribution with assists reinforces a midfield with few options in the squad and sends a message to the rest of teams: Tottenham is back in the market. 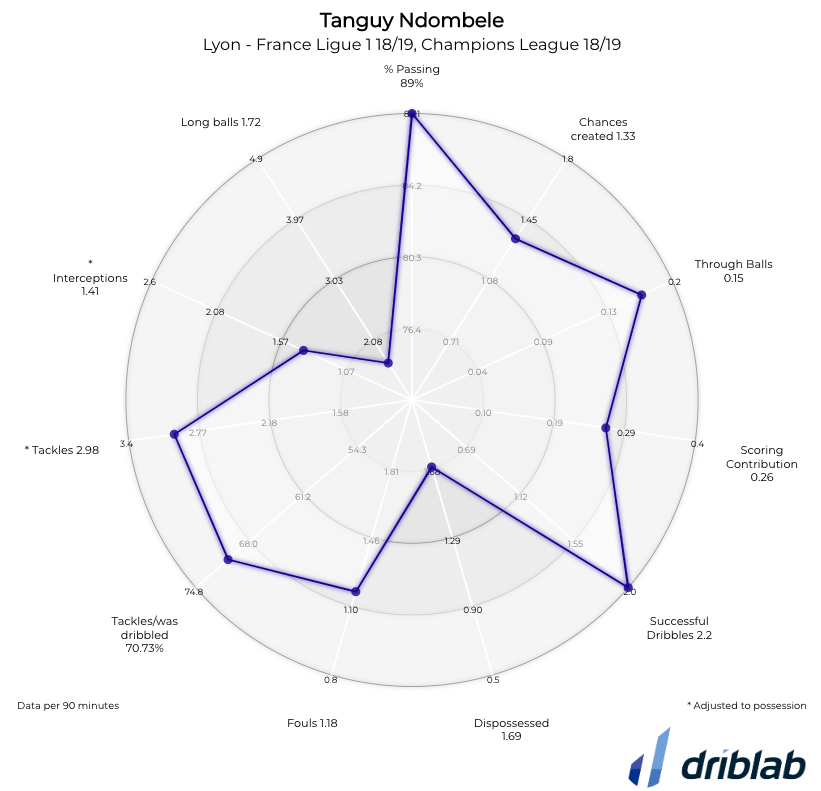 Although it was unknown to the general public, Luka Jovic’s 2017/18 campaign already left many clues as the kind of player profile he was. Reliable in definition, great shooting selection and finisher within the area. In past year Luka Jovic’s growth came not only in his ability to unmark himself inside the box and his finishing ability – as his evolution in the chart below shows – Luka Jovic also grew with the ball, became a great assistant and further improved his ability to shoot at first touch and with both legs. In short, Real Madrid needed a ‘9’ in its squad and has been left with the second best center forward under 21 of the major leagues according to our models (Mbappé leads this ranking). 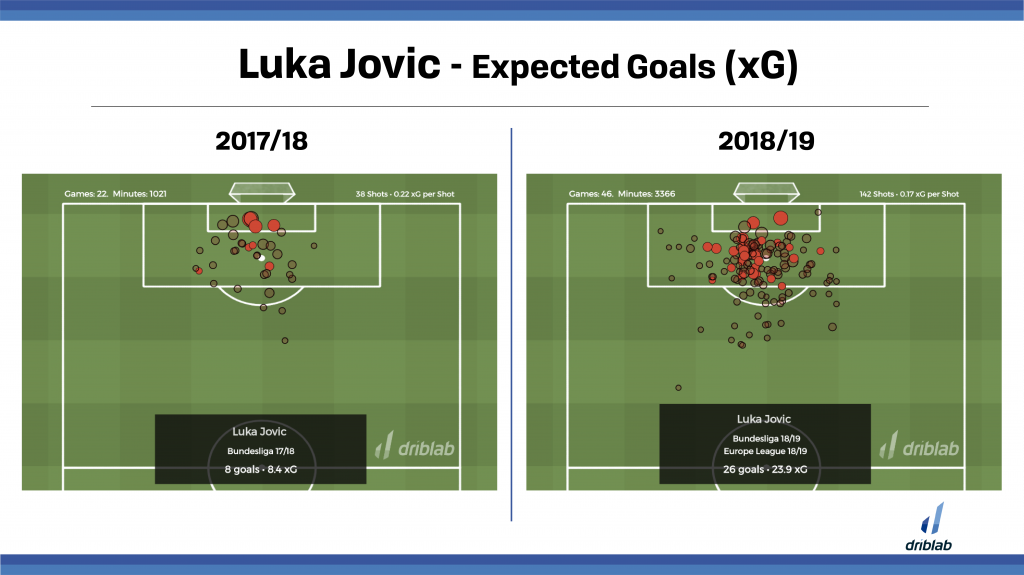