There are still many days of league competition in the most important tournaments of the European scene but many teams have already realized that their objectives for the season are almost impossible. This reality, identified in the present of Real Madrid, is marked in great measure by the lack of effectiveness with the goal. In Driblab we have reviewed the effectiveness of the teams that occupy the European spots in the five major leagues (as of March 6) and their relationship with the expected goals for and against and the goals scored and received. In this way we have verified that the average of these teams is 1,20 goals expected in favor for each goal scored and 1,60 goals expected for each goal received. Although there are different realities in both sides: from the success of PSG or Atletico to the suffering of Real Madrid highlighting the surprising and effective Getafe built by José Bordalás. 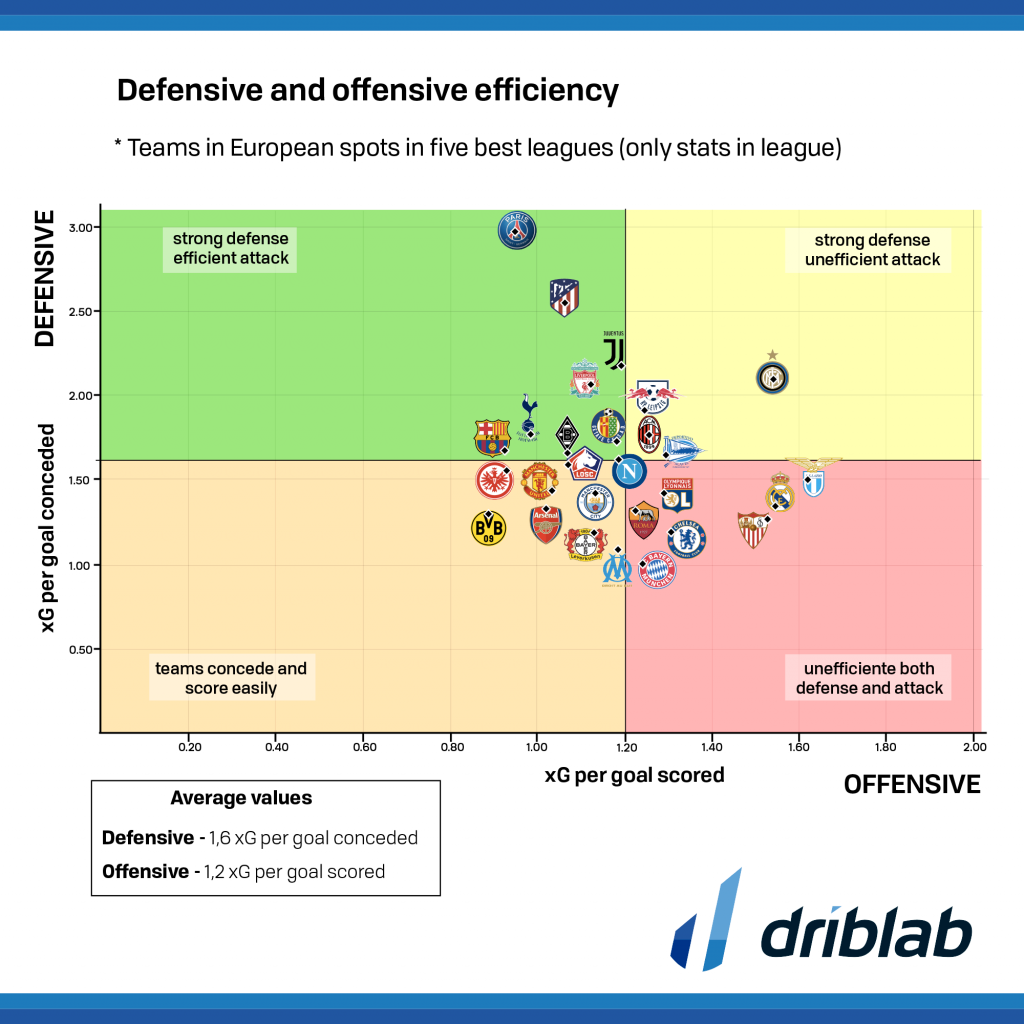 Looking at these figures, the teams with the most overall efficiency in both attack and defense are PSG, Atlético de Madrid, Juventus, Tottenham, Liverpool, Barcelona, Gladbach and Getafe. At the other end of the spectrum, many big clubs are looking for solutions to their problems but without success: Sevilla, Chelsea, Lazio, Bayern and Real Madrid have a lot of work ahead of them. The teams in green need to generate little to score and also the rivals need to generate many expected goals to score. In yellow Inter stands out as the visible face of a team with a good defensive system but problems to score. Similar problem that is reflected very clearly with Abelardo’s Alavés who aspires to a Champions League spot based on his great defensive system but with more problems to finish occasions. In orange Borussia Dortmund, Arsenal and Eintracht Frankfurt are the best examples of effective attacks (Alcácer-Sancho-Reus, Jovic – Haller and Aubameyang) but without the ball they do not have the same strength. And in red the more worrying teams in both areas. Logically, this table does not explain everything by itself, in addition it is necessary to revise the ability to generate danger and the permissiveness not to let danger situations against but this allows us to have an easy idea of the state of form of theirs lines: the defense of the Atletico continues at his level, the forwards of Barcelona do not tend to miss clear chances, the offensive trio of Frankfurt is ready for bigger challenged and Real Madrid and Seville have serious and generalized problems.